How to make your own laptop battery out of lithium-polymer cells.

Just thought this story may help others fix old laptops with batteries that no longer hold the charge.

A few years ago, sometime in 2016 or 2017 - I bought a really cheap laptop off of a Microsoft Store website. The laptop was Trekstor C11B - the cheapest Windows laptop you could get at the time, that wasn't a celeron or a chromebook. The laptop had a joke 32GB SSD and 4GB RAM, but a nice ergonomic design and a decent full HD touch screen. Later I upgraded it to 256GB SSD, but this story is not about the laptop.

It's about how to make a new battery yourself for basically any laptop brand no matter how old.

Disclaimer: the below instructions are provided for information purpose only, I'm not responsible for any of your attempts to fix something that may have failed, especially if you never soldered your own wires before. In other words - your mileage may vary and you are on your own. With that being said keep reading.

What happened with my Trekstor Primebook as it was getting older - the battery was getting bad. Eventually it became so bad that even touching the power connector would shut down the computer completely. The other weird thing was the laptop had problems coming up after abrupt shutdowns. I believe that was due to its power management when it detected no battery it wouldn't start up at first, but only after a few power button presses. Even worse, the battery started to overheat and expand to the point that the keyboard began to bulge. That was not only bad but really dangerous.

So I opened the laptop and removed the blown battery pack. This is what the original battery looked like (cooled down and deflated): 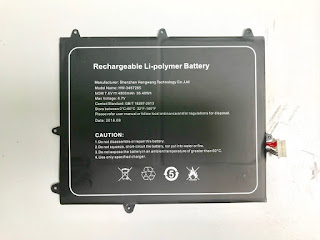 I thought I would buy the new battery somewhere. Tough luck. The manufacturer (Trekstor Gmbh) was done with laptops and was selling scooters. Nice. EBay or Amazon didn't seem to sell anything even remotely compatible. I even asked a buddy to post a 'helpme' message at FindOrBuy.com (https://findorbuy.com/item/details/414)

It took me several months to realize that no one in the entire world except may be one aliexpress seller really sells that type of battery. Even so, the price was around $60USD and the shipping times where anywhere from 2 months to never. Not good. I never expected to get something from Microsoft Store and later realize that there is no support and you are on your own especially if the manufacturer is out of business.

So I went ahead and (carefully!) cut the battery shell open to remove the external sticky plastic. Hey, don't cut the actual cells, because they may blow up in your face and start the fire(!). It's all because of lithium gel inside the battery which may combust if it touches the air.

I very carefully cut and pulled the sticky plastic around the battery pack - on the concrete floor in the garage for extra safety - keeping the cells flat and not bending them at all. I didn't cut into the battery cells, just peeled the black plastic cover to separate the cells from the frame.

In my particular case there were two 3.8v battery cells inside the frame. Each cell is about 70mm by 110mm size and about by 3mm thick. Here is the photo of one of the cells after I cut its connectors out of the charging circuit: 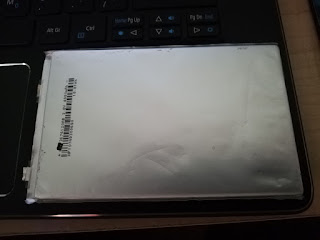 It took me quite a bit of time to actually find a battery cell manufacturer in the continental US which could ship the cells. I found one on ebay (sorry no link, just a photo) 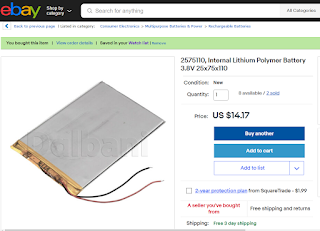 I emailed the seller to make sure the battery is as pictured and is close to 2.5mm rather than 25mm (1") thick. The other two dimensions - 75mm and 110mm were about right. As the matter of fact, the new battery was wider a bit than the original, so I had to adjust the frame before install.

I bought two battery cells each 3.8v to have 7.6v total. They came in a small box a few days later. Each cell came pre-charged to 3.8v and with the positive connector insulated. Each battery cell also had some circuit inside. Luckily, the cell+circuit size was not exceeding my specifications.

To solder the cell wires to the frame terminals you will very likely need an aluminum flux and solder kit (click for the product) such as the one I bought from Amazon. It was a tiny bit too expensive for my needs (I needed just a little of it), but it came with the applicator and the solder wire - which both turned out to be very useful. The actual product looks like this: 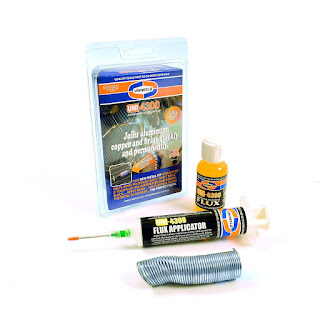 I am not too good at soldering things. Before this I soldered a few copper wires, never aluminum. So I decided to practice a bit. I tore off a small sheet of aluminum foil - food grade, nothing less. Heated up a small soldering iron (no more than 40W). Dropped a few drops of the liquid flux from the kit on the foil and used the solder wire from the kit. I figured that I need very little flux liquid and very little solder wire with just a touch of the solder iron for my purpose. The alum flux works nicely with temperatures lower that regular copper solder flux. That was good to know before trying to solder the battery cells to the terminals.

Even before soldering anything I tried to arrange the battery cells in the packs and close the frame. It turned out the cells were a bit too wide, so I cut and sandpapered off some plastic from the frame to allow its edge to overlap one of the cells. See photo: 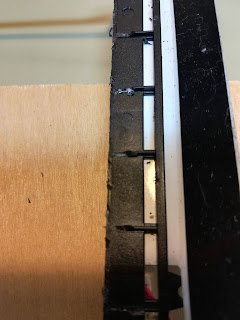 Next, keeping my fingers crossed (imaginably of course) I first applied just a bit of solder alloy to the terminals without attaching the battery wires yet. The plan was to make sure the flux works well. Also, the instruction recommends washing off the excessive flux with water. I figured it's because the flux is purposefully acidic for removing aluminum oxidization, and leaving it on the surface may corrode the terminals over time. So.. I tried to apply just a bit of water on the terminals to wash off the flux. It removed some but not all. Dried it afterwards too with napkins.

This is what the frame with solder terminals looked like, the battery cells are not installed yet. 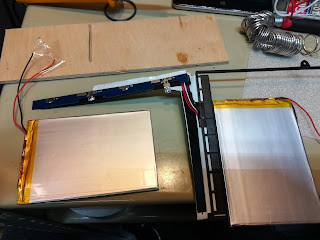 Next, I soldered the negative wire to the corresponding terminal on the frame, then removed the scotch tape from the positive (red) wire and soldered it to its terminal. Ditto for the second battery cell.

I immediately covered the electric terminals with sticky tape to prevent any accidental short circuit. 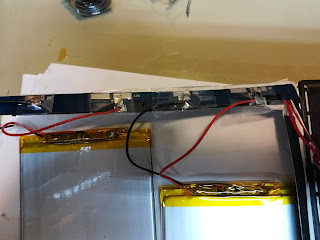 I arranged the cells within the frame and closed the frame. 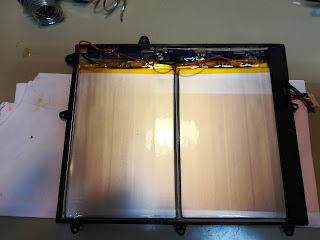 I used duct tape (white) to hold the cells within the frame: 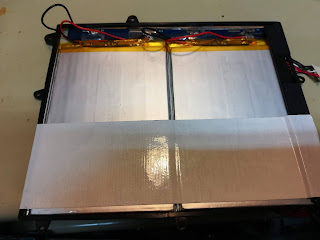 The next photo shows what the 'final product' looked like before installing into the laptop: 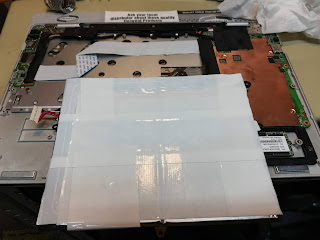 The laptop worked right after install! 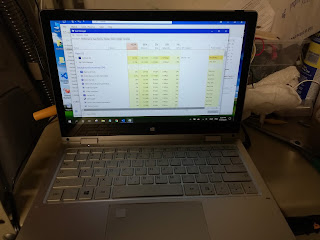 Subsequent tests showed that the full charge is enough for about 2 hours of work under medium load - screen on 90% brightness, active web browsing, etc. That's about the same when the laptop was new.

I hope that after a few drain and recharge cycles the computer will adjust and slightly improve its battery use time.